For country folks, the winter season has always been time of little work. The few animals they had were fed quickly and the weather was quite uncomfortable, and therefore people longed for spring to arrive. The season of long winter evenings is also the season for story telling, and in those days, many a spooky story was told. Through the Muller characters the spooky story of the four seasons comes to life. 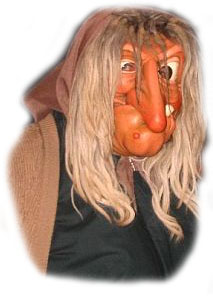 The longed-for spring season is portrayed by the Halbweisse. They show light and youth. The powerful summer is represented by the Melcher and its sophisticated but rare edition the Spiegeltuxer. The Zaggler symbolizes autumn and the wild Zottler symbolizes the winter months. The scary Hexe precedes the characters and by doing so makes room for them. Other characters that may accompany the Mullers are times, such as the Bär (Bear) and the Klötzler (Woodman). Together these figures make up the dancing tradition of the Mullers.

This particular form of Muller dancing is from the Tyrolean mountain village of Rum, Austria near the city of Innsbruck. This dance was traditionally performed during the Fasching or Mardi Gras season. Which is from Three Kings Day, (January 6th) until midnight on Fat Tuesday, the night before Ash Wednesday.

All the figures wear hand-carved wooden masks and each have their own style of costume featuring embroidered pants, lederhosen and colored burlap. Each figure also wears a different head dress featuring silk flowers, beads, turkey and peacock feathers and animal pelts.

All steps, movements, and sounds typical to the traditional masks, are similar in character to the courtship displays of game animals. The Muller uses them to attract attention and to impress. It starts with the smacking noises the Muller makes with his lips. The very rhythmic steps are particularly remarkable, which, at times, have almost ecstatic characteristics. By using these movements, the masked Muller tries to draw attention to his costume, in particular to his head dress.

The Mullerschlag (Muller tap) is an inextricable part of the Mullers’ performance, which originally was to bring fertility, but nowadays only has the meaning of a greeting or good wish. In many cases it is interpreted as an honor, and many a person is offended, if he/she does not receive a ‘Schlag’.

Naturally, music is an important part of Fasching and it should definitely be played using an accordion or “button box”. The music currently used by the Mullers is known as the “Muller Waltz.”

All the figures wear hand-carved wooden masks, many of which are carved and painted by our local woodcarver Bryan Berenson. In Tyrol, Bryan apprenticed and is now certified as a wood and stone sculptor. Bryan’s experience and talent help to keep the tradition of the Mullers thriving here in America. Each of the figures have their own style of costume.

The Muller Fasching Verein is proud of what it has accomplished over the years. We are not only the first club of its kind in North America, but we have successfully brought the customs of the Rumer Muller across the Atlantic where this unique type of dancing can be shared with a whole new audience. We would like to thank our friends the Rumer Muller for their support in our efforts to educate the people of the United States in their great customs.